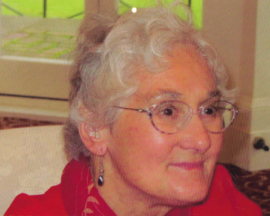 Family Friends were recently informed of the sad news that one of the Founder Members and Trustees of the charity, Margaret Widdicombe, passed away peacefully on 6th November 2020.  Margaret was on the original committee who set up a scheme to support families in Woodlands Park in early 1995, along with the Rev. Mary Austin.  The early success of the work meant that the scheme was widened to support families in all of Maidenhead. In June 1996, Family Friends became a charity in its’ own right and Margaret was appointed as Vice-Chair and worked unstintingly both as a volunteer and as a member of the Management Committee.  Margaret was an incredible support to Family Friends and was successful with an application for the charity to be awarded the Queen’s Award for Voluntary Service in April 2006. Glenice White, a former chair of Trustees, said that Margaret cared passionately about the work Family Friends undertook because she cared passionately about people, especially those who were less fortunate. Glenice said “If Margaret were a stick of rock, she would have Family Friends written right through her centre. She was indeed a wonderful friend to Family Friends.” Margaret’s husband, Eric, who also volunteered for Family Friends, said he remembered the very early days of fundraising where they took amateur games they had created to summer fetes, raising perhaps £25-£50, which made a huge difference. All at Family Friends send their deepest sympathies to the family. Margaret’s funeral will be held on Friday 4th December 2020. The family have very kindly asked for donations to Family Friends in Margaret’s memory. Eric said that Margaret always looked back on her contribution to Family Friends with such great pleasure and pride that a donation in her name is so fitting.